Nollywood actress and producer, Mercy Johnson has expressed her dissatisfaction with an action taken by a bank she saves her money.

Mercy Johnson screamed passionately in the video, claiming that her “bank just deducted 11 naira from her account,” and that she doesn’t want to mention the name of the bank but all she wants is for the bank to do the needful and return the money into her bank account.

“I don’t want to name the bank, but my Acc name is Mercy Ozioma Okojie and Sapa is everywhere. Return my 11naira.” She wrote. 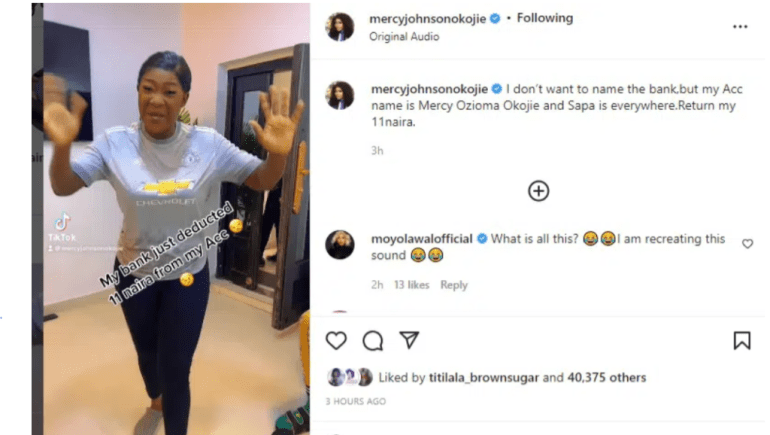 Meanwhile, Bovi, a popular Nigerian comedian and actor, has said that his biggest fan in the showbiz sector is a witch, who proudly displays her face.

Bovi made this revelation while interacting with his fans on Instagram during a question and answer session with fans and followers.

Bovi was asked by a fan who has been his strongest ally since he began his comedy career in the entertainment sector.

Bovi responded by posting a photo of his wife, referring to her as the witch who has been his most ardent supporter.

When questioned if he could marry a second wife, Bovi explained that he had awoken in the dead of night to find his wife looking at him.

SEE ALSO   VIDEO: “How my ex-boyfriend l0cked me up and r@ped me daily” – Actress Juliet Ibrahim (WATCH)