Sharing screenshots of a chat they had not too long ago, that contained voice notes, the comic Yoruba movie actor, Jigan in what seems like a joke, dared Funke Akindele to either beg him or watch him release a voice note to the public.

Jigan wrote “@funkejenifaakindele do normal ooooo in this voice note….Funke Akindele Dey beg me I will release the original voice note soon….I go do your face wotowotooooo ….Ogban Dey ground I swear….Who can guess what was said in this voice note ???” 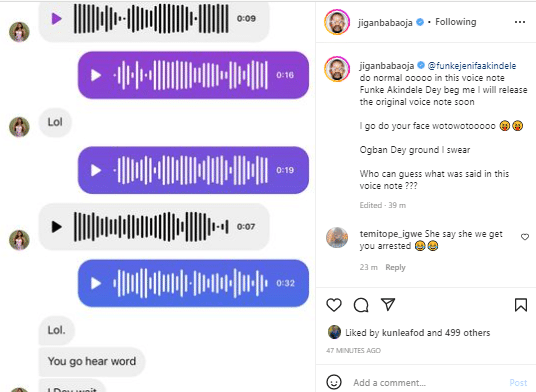 As of the time of this report, Funke Akindele was yet to respond to the somewhat joke.

News recalls Jigan BabaOja, in December 2021 emerged as the best actor in a movie titled ‘Inside Life’ courtesy of the Europe film festive award.

This comes a few months after Jigan lamented about consistently playing gateman roles in Yoruba movies.

Taking to his verified Twitter handle, Jigan pleaded with movie producers to help his career by giving him other roles.

Announcing the latest achievement on his Instagram page, Jigan BabaOja expressed his excitement noting that he spoke what he wanted into existence, and it’s happening already.

Funke Akindele and JJC Skillz exposed for allegedly putting up a tough front at AMVCA, more details on their family drama emerges

I Will Never Respect You, Stay Off My Case – Funke Akindele Tackles Colleague’s Wife