Nollywood actor, Kanayo O. Kanayo has slammed a lady who called out Nollywood celebrities and castigated them for mourning the death of Leo Mezie.

Leo Mezie reportedly went for a kidney transplant but couldn’t handle the complications.

Leo Mezie was reported to be sick years ago and went for a kidney transplant last week where he was recovering but unfortunately couldn’t handle the complications that came after the kidney transplant and gave up the ghost.

Reacting to this, the lady identified as Eteyi_Deboroah said celebrities are crying more than the bereaved now. Meanwhile, Leo Mezie had been soliciting funds but no one came to his aid.

Responding to her, Kanayo O. Kanayo described her as an idiot to talk down on celebrities and asked her if she is on the Actor’s Union. 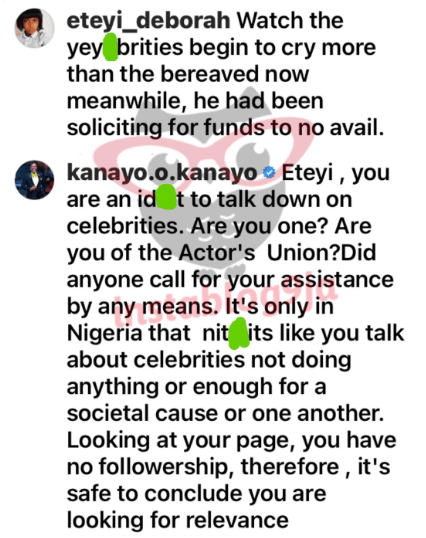 See reactions from Nigerians below;

ozoriyanga wrote; ‘It is not the duties of individual actors to always assist with matters of this nature. To the extent the guild does not already have a group insurance policy, they should negotiate one or sponsor a bill to have production houses provide actors working for them some form of insurance.

jaymazing wrote; ‘Death is inevitable and the person that pass away has family but no one is crucifying their family the way they are crucifying his colleagues, we just have a way of feeling entitled about everything even if it’s not directly related to us.💔💔💔’

iampraisejedy wrote; ‘He died while recovering from kidney transplant not that he wasn’t helped to get a kidney for transplant. Some people just like talking anyhow.