Nollywood actress, Empress Njamah has publicly called out her bestfriend, Ada Ameh for being a bully.

The actress called her out for not only bullying her but traumatizing her.

According to Empress, she has been keeping quiet since for social media not to see the other side of her.

However, she can’t take it anymore as Ada Ameh isn’t a nice person.

“@adaameh I have been keeping quiet since for social media not to see the other side of you, but I can’t anymore, you are not nice person, you are a bully, thank God for this call today, I have evidence, am so traumatized right now cause am a soft person, you will hear from my lawyers. Domestic violence, torture, mental beating, INEC humiliation. @thesharkexpress you want to put asunder between @adaameh n I Abi?”.

This isn’t the first time Empress Njamah is calling out her bff.

The friendship of Ada Ameh and Empress Njamah is one which many had likened to the popular cliche ‘a friend that sticks more than a brother’, and celebrities and fans have not stopped gushing at them.

In a post shared on Instagram, Empress Njamah jokingly called out Ada Ameh for refusing to pay the sum of 1.8 million for using her expensive phone to take her beautiful photos.

According to Empress Njamah, Ada Ameh ignored her, and she’s tired of asking her, and she had no choice but to bring it to social media. 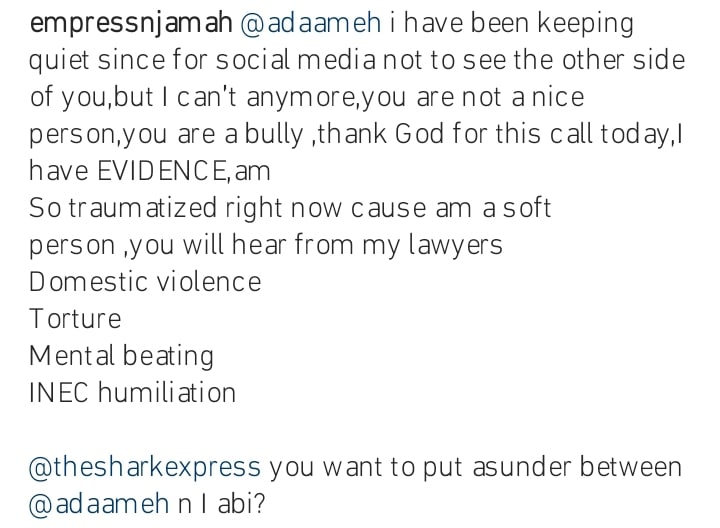