Days after movie maker, Gbadebo Osmond’s death, actress Wunmi Toriola has called out Mercy Aigbe, Laide Bakare, Faithia Williams, Afeez Owo and others over their lack of remorse and pity.

Recalls that veteran actress, Fausat Balogun announced the death of Osmond Gbadebo who lost his life to the cold hands of death on Monday, May 30th. And other actors including Mercy Aigbe, Laide Bakare Faithia Williams, Afeez Owo and others took to their handles to mourn his demise. Read here

Though many of the deceased’s colleagues grieved over his death but what surprised actress Wunmi Toriola was the fact that the same actors and actresses who claim to be sobbing over his untimely death are the same people who are posting dance videos and other activities in the period they are suppose to mourn him.

A quick look at Mercy Aigbe handle, shows that after she posted a photo of Osmond, to lament his passing, she moved on to post a dance video, celebrating the new month and her son’s upcoming birthday.

News also noticed that Laide Bakare who in a sorrowful mood shared a recent video of the actor, to mourn his death, went on to lavishly celebrate her son’s birthday party the same day Osmond’s death was announced.

Infuriated by all these, Wunmi Toriola queried why her colleagues quickly moved on after Gbadebo Osmond’s death, asking them why they threw away remorse and pity all because of likes and comments.

“Gbadebo’s death caught me unawares, i didn’t expect it but God understands. And all the family members he left behind, God will take care of them. Please what is happening, i don’t understand, people have thrown away pity and remorse all in the name of trying to be relevant, some people after posting RIP, they quickly posted. dance videos, you all have no remorse or human feeling anymore just because of likes and comments..”, she ranted as she spoke in Yoruba.

SEE ALSO   ‘My wife has never frustrated me in the 16 years of our marriage, but…’ Actor Yul Edochie

Captioning the video she further dared her colleagues to attack her if they think she is wrong for speaking her mind.

Wunmi in spirit of mourning went on to shared the burial postal of Osmond, saying, “Forever in our hearts
You will be remembered ,you birthed Queen Lateefah and ADELE ORAN for me and i never held the glory away even when you say “ko need ko post mi”
My friend,my brother,alarinfin mi”
I will miss you so much.
May your soul rest in peace Osmond ♥️♥️♥️♥️♥️
We love you but God loves you most♥️♥️♥️
I cant believe i am here smiling at the memories 😃😃😃😃
Osmond ♥️♥️♥️♥️♥️♥️♥️♥️♥️♥️♥️” 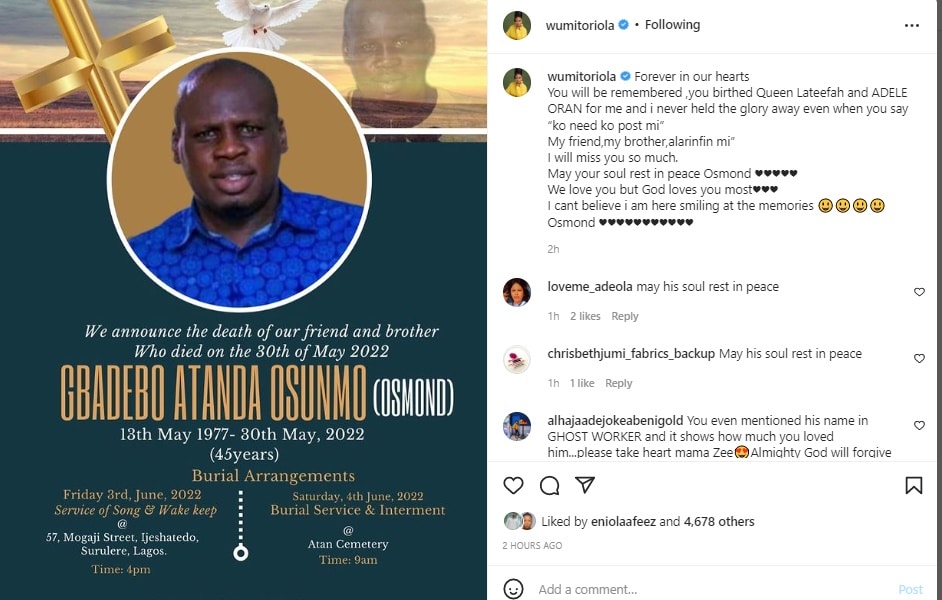 News earlier reported that single mum of two and actress Regina Chukwu broke down in tears over the sad news of her colleague, Osmond Gbadebo’s death.

The actress Regina Chukwu disclosed that she was worried about his health but he assured her that the worst had passed.

“Osmond!!! Waking up to the news of your demise is the hardest thing I have had to deal with in recent time. Haaaaa osmond haaaaa! The last time we saw on set, I remembered praying for you, I remembered how worried I was and you told me the worst has passed and that all I should be doing is thanking God on your behalf haaaaaaa Osmond, so that time we spoke on the phone was going to be that last time …it’s been very very hard to stop the tears o, cos for real you is one guy with a free spirit, you are nice I mean this guy was just a nice human and very hardworking, to think you just had a baby and that young wife of yours. It’s well o. Rest In Peace my brother. This is really hard but we can’t question God” Regina Chukwu wrote.