A Nigerian man known as Chinedu Njirinzu who welcomed a set of twins with his wife after being childless for 16 years has reportedly died.

Igwe Ihedioha, the deceased’s brother-in-law, paid tribute to him on Facebook on Friday, May 6.

“Words have failed me. I am heart broken by the sudden death of my brother in-law, Prince Chinedu Njirinzu(Skippo)

“He loved my sister so much and supported her for the 16 years of waiting on the Lord for child. Just 3 months after God answered their prayers with Twins(boy and girl), now he is no more” he wrote. 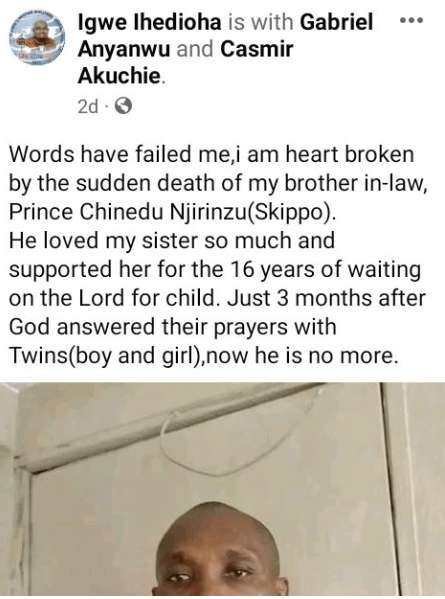 In other news, award-winning Nigerian musician and Afrobeat superstar, David Adeleke popularly known by his stage name Davido, has announced plans to get married soon.

Davido who allegedly has four children with four different women has decided to take his relationship status to the next level and settle down once and for all since he is not getting any younger.

This comes days after Davido allegedly affirmed his affair with a new lady with whom he declared that he wasn’t done enjoying singlehood after reports of him buying a brand-new Range Rover for her, Ama Reginald, surfaced on the internet.

Taking to his Instagram story, Davido shared a video of himself captioned, “I think I’m gonna get married soon, cos….,” while adding a clip from a caucasian fan who said, “I don’t want to be a player no more.”

This subtly explains that Davido wants to quit being a player and the only way to enforce this decision is by settling down with one woman.

After 16 Years Of Waiting, Nigerian Man Dies Three Months After His Wife Gave Birth To Twins

VIDEO: Woman sits on coffin to prevent a corpse from being buried near her house (WATCH)