The comedian took to his comment section to open up on his longtime feud with the comedian.

Ay claimed that Basketmouth has been battling with his uncontrollable superiority complex for the longest.

To avoid his incessant childishness, he decided to stay at far length from the comedian.

“I don’t have issues with him. But people having unnecessary issues with you are the price you sometimes pay for being progressive. He has been battling with his uncontrollable superiority complex for the longest. So avoiding his incessant childishness only became necessary for my own sanity”.

When another fan insisted to know if him and Basketmouth don’t talk, he said, “we only talk to those who want to talk to us. Does this make sense?”.

The comedian had a question and answer session with his fans where he took a swipe at Ayo Makun.

A fan had questioned why the comedian doesn’t perform on Ay show and he replied questioning if he had seen Chris Rock performing at Kelvin Hart.

Another fan noted how he doesn’t see him, Buchi and Basketmouth associate with Ayo.

Bovi affirmed that Ayo Makun is too black and he refused to bleach.

Question : “Why you and A.Y no dey perform for each other show?

“You ever seen Chris Rock at a Kevin Hart show?”

Question : “I have noticed Bovi, Buchi and Bright don’t associate with AY. Why is that?

SEE ALSO   “I Was Just Catching Cruise” – Lady Who $lept With D0g For N1.7million In Lagos Cries Out (VIDEO)

“He’s too black and he refused to bleach”. 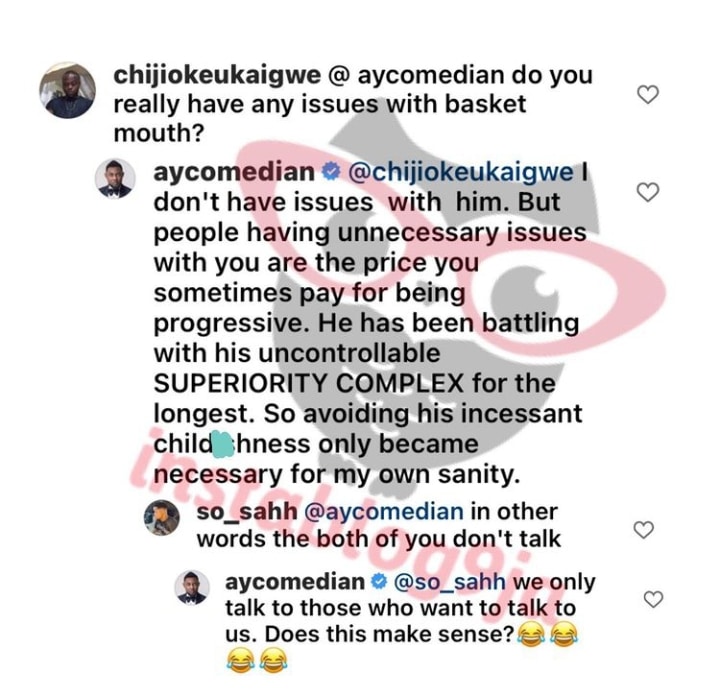 Mixed reactions as AY Comedian says he can’t share photos of his wife, Mabel during pregnancy