Actress and sexy entrepreneur, Eniola Badmus has taken a swipe at her colleagues like Mercy Aigbe, Laide Bakare and others, who have been in the news lately over their loud lifestyle.

Now shading them and praising herself for keeping a low profile, Eniola Badmus whose body transformation is still the subject of discussion on the lips of many Nigerians, has bragged that no one knows what is really going on in her life because she is very private.

Eniola Badmus moments ago on Instagram wrote “My biggest flex is that nobody ever knows what is really going on in my life. Where I am, who I’m with or my next move unless I make it known! Therefore anything anyone says is just an assumption. Privacy is the only luxury. Privacy is peace.” 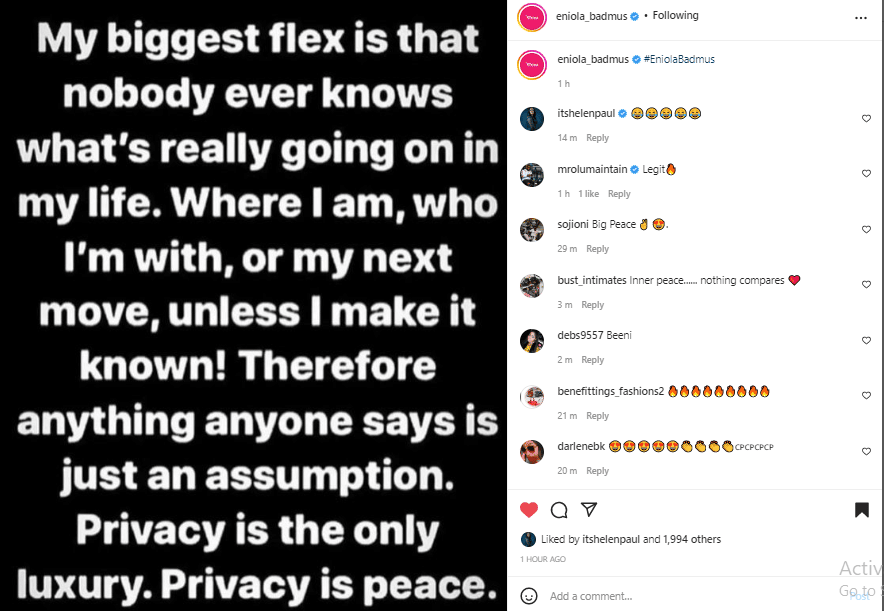 Recalls Nollywood actress, Eniola Badmus has made headlines In recent times for her transformation body.

Since her body transformation, Eniola Badmus who is now a TikTok addict has never ceased to leave many of her fans in awe of her new look.

Although the actress did not explicitly spell out the procedures that resulted in the weight loss, from her explanations, it appears that the actress must have undergone gastric bypass surgery.

2023 Elections: Eniola Badmus Comes Under Fire Over Choice Of President