Actress and legitimate business woman, Wumi Toriola, has cried out to God and wondered why she is not able to afford the surprising all-of-a-sudden luxury lifestyle of her colleague, Laide Bakare.

News recalls that Laide Bakare earlier today, splashed millions on acquiring two luxury cars; an acquisition that is coming barely a month after unveiling her N100million Mansion in the heart of Lekki.

Showing off the cars on Instagram, Laide Bakare revealed that she got them to compensate herself for her years of hardwork and labour.

She wrote, “There comes a time in every girls life when she decides to pamper herself extravagantly to compensate for years of hardwork and labor, having saved for years to acquire more luxurious houses and vehicles, it is save for me to say that persistence is the basic key to glorious success. Little by little then here I’m today. Just few weeks after my new house opening.. I give you all the praise ya Allah NB: pls note, this is not a show off, but to further encourage ladies out there that it’s achievable, you can be successful on your own without depending on anybody in life. Huge congratulations to me. Alhaja Shakirat Olaide Bakare everything na double double. I deliberately choose these two colors, to match my new house painting”.

Responding to the post, Wumi Toriola cried out saying “God, am i not hardworking?” 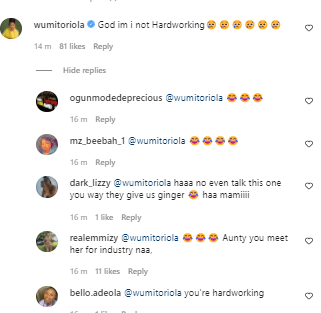 Meanwhile, Wumi Toriola has reacted to the continuous comparison of herself and colleague, Mide Martins.

The Yoruba actresses who have become very skillful in interpreting an “abusive or dramatic” role were pitched against each other in a twitter debate weeks ago.

SEE ALSO   “If May Edochie gets pregnant for another man and post second marriage, how will you feel”, Solomon Buchi berates Yul Edochie

Reacting to the various tweets, Wumi Toriola made it clear that though she loves healthy comparison, she isn’t competing with anyone.

However, she wants them not to forget that all actors are unique in their own ways.

Wumi appreciated her fans for loving her craft and wanting the best for her.

She reminded them that she is still a work in progress and is growing and learning.