Billionaire businessman, Obi Cubana, and other celebrities are mourning the passing of skit maker and internet sensation Madam Social.

Madam Social’s death was announced on her Instagram profile on Tuesday.

Sharing a picture of Mama Social, the post read, “She can’t be gone! How do I witness that laughter of yours? Oh my God. Obi’m! Madam Social ka Emesi”

According to the speaker in a live video shared on Madam Social ‘s page, Madam Social was bedridden due to ill-health for a few weeks and was unable to speak.

The video was captioned, “Please pray for Madam Social.”

Her picture was also shared on her Instagram story with the inscription, “RIP”.

Reacting to the heartbreaking news, Obi Cubana wrote, “Wow! Such a sad one! Goodnight mama!”

Actor and singer, David Jones David, wrote, “Oh my God. Why now? I just got to know about her two days ago. This is so sad. RIP mama.”

In other news, renowned religious leader and clergyman, Pope Francis, has reacted to the massacre that occurred in Nigeria and has thrown the country into a state of mourning.

It was reported that on Sunday, some unknown gunmen attacked a Catholic church in Owo and massacred all the members of the church brutally.

An eyewitness said “the herdsmen invaded the church during the Mass celebration at the Catholic Church in OWO. They killed all the people and kidnapped the priest! The videos are gory…the whole church filled with dead bodies and blood everywhere….they then bombed the premises after the massacre.”

Reacting to the barbaric and condemnable incident, Pope Francis who took to his official Twitter page said he is deeply saddened to learn of the horrific attack at church and urged all to pray for all those affected by this act of unspeakable violence and for the conversion of those blinded by hatred and violence 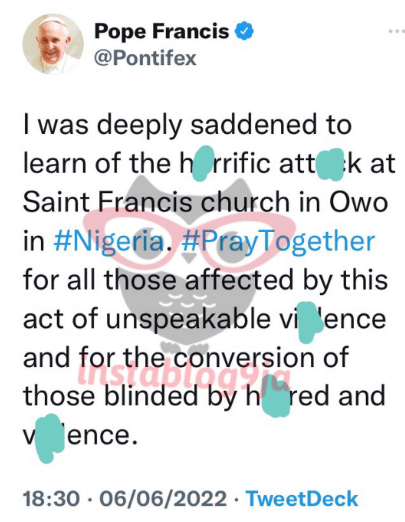