The victims of the gruesome attack on St. Francis Catholic Church, Owo, Ondo State, have been laid to rest. 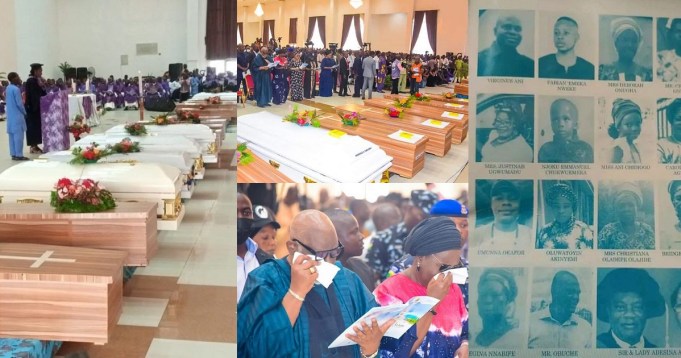 June 5 was a Black Sunday for Nigerians after gunmen invaded the church and shot sporadically at worshippers, leaving scores dead and others injured.

The remains of those killed in the attack including men, women and children, have been buried in the state.

A funeral mass was held in their honour on Friday, June 17, and it was attended by Governor Rotimi Akeredolu and his wife alongside, Olusegun Mimiko, a former governor of the state.

Photos and video from the funeral mass have been shared online. See as you scroll,

May their souls rest in peace.

A while ago, a video which shows the moment the Oluwo of Owo announced the arrest of the culprits who attacked a Catholic Church in the Ondo, has been shared online.

This comes after the state government revealed that last Sunday’s attack on St. Francis Catholic Church in Owo left over 20 people dead and over 50 people injured. The attack has also been linked to ISWAP terrorists.

Oluwo of Owo, Gbadegesin Ogunoye III announced the arrests of the suspects linked to the shooting on Thursday June 9, as members of the community cheered on.