A Nigerian lady identified as Annang Queen has given her boyfriend N20,000 just to go and get a haircut because she doesn’t like to see him looking unkempt.

The lady who says she pays attention to details, noticed that her boyfriend was not in the best of shape when they recently had FaceTime to deepen their butterfly love.

Snapshots of their conversation reveal that the lady upon seeing how untidy he was, sent him a cool N20,000 to have a hair trim.

In the chat, Annang asked her boyfriend when last he cut his hair and he said three weeks ago. She immediately protested and said that was too long a time after which she sent him the aforementioned figure to sort himself out.

The guy was totally shocked by her gesture as he heaped appellations on her while reminding her that the money was too much for a ‘mere’ haircut.

In a related development, a newly married man thought his wife had given him a raw deal and reacted unexpectedly by driving her out of their matrimonial home on the premise that she was not the virgin she spoke fondly of.

Apparently the woman has told his husband that he was a virgin before they got married. Shortly after the nuptial, the man who ostensibly takes pride in virginity was in for a shock after it emerged that she has tasted the forbidden fruit before.

The story crawled its way into the internet domain after a tweep whose name on the microblogging platform identified as ChukwuSomma narrated it.

The tweep wrote; ”A girl from my area had her bride price returned and bags packed back to her father’s house because she lied to her husband about being a virgin. This is just a marriage of 4months😰….so men still do this?? Omo!” 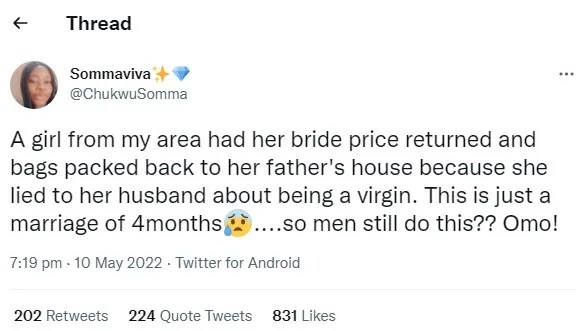 If I Don’t Take Care Of You, Who Will?- Nigerian Lady Says As She Sends Her Boyfriend N20,000 To Get A Haircut