Shawty precious, as she is fondly known on social media has finally apologized following the attacks she received for her affair with Big Brother Naija ‘shine ya eyes’ finalist, Emmanuel Umoh.

News reported that on the sixth episode of the reunion, show host Ebuka Uchendu touched on Emmanuel and Liquorose relationship and Liquorose opened up on what led them to part ways.

Liquorose claimed she caught him cheating on her while on their trip to Dubai in November.

According to her, she had walked in on him with a lady in his room.

Liquorose said, “The light was off, the music was playing, it was dark, the girl was sitting at the edge and covering her face with a facemask”.

Shockingly for her, Emmanuel didn’t make any attempt to reach out to her following the incident, he didn’t follow her after she walked in on him neither did he call her or apologize.

Following the bombshell, internet sleuths digged up the mystery lady’s identity and mercilessly dragged her.

Reacting, Precious cried out that she is just a friend of the reality star.

According to her, she met him in Dubai and didn’t know he was in a relationship because he told her he was single.

She begged Nigerians to stop attacking her and to keep her out of the drama because she has a boyfriend.

“Emma and I are just friends he met me in Dubai last year where all these happened I never knew he wasn’t single, you guys should stop attacking me, keep me out of these pls I have a boyfriend you guys should go attack Emma cause I never wanted all these”.

News recalls Liquorose and Emmanuel had confirmed that their once rosy love affair had crashed for good.

Ebuka Uchendu, the show host, had asked if their relationship can still be saved and Liquorose made it known that she was done likewise Emmanuel. 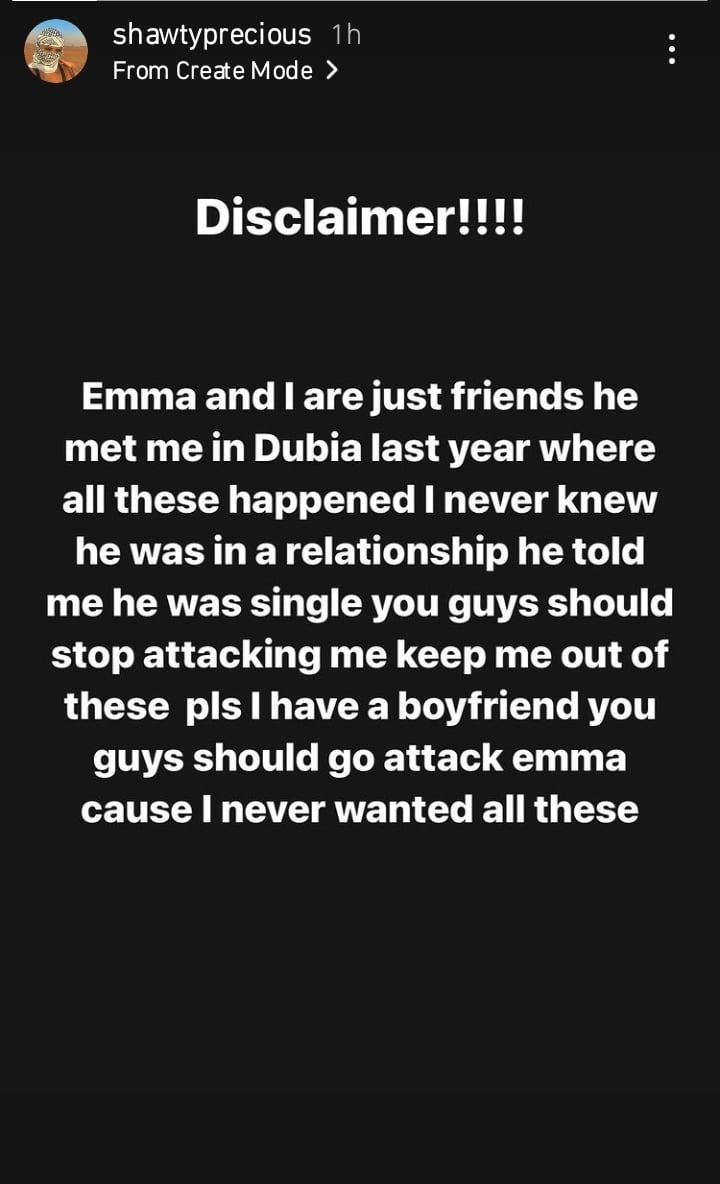 Lady who had an affair with BBNaija Emmanuel speaks out

#BBNAIJA:‘I caught Emmanuel in the room with another girl, I walked out and he didn’t follow me’ – Liquorose breaks silence

VIDEO: Nollywood celebrities react to what Itele did for his 4 abandoned children and ex-wife (WATCH)