Nollywood actor, Murphy Afolabi has been mercilessly dragged online for living a pretentious life with his latest comment on Itele’s post. 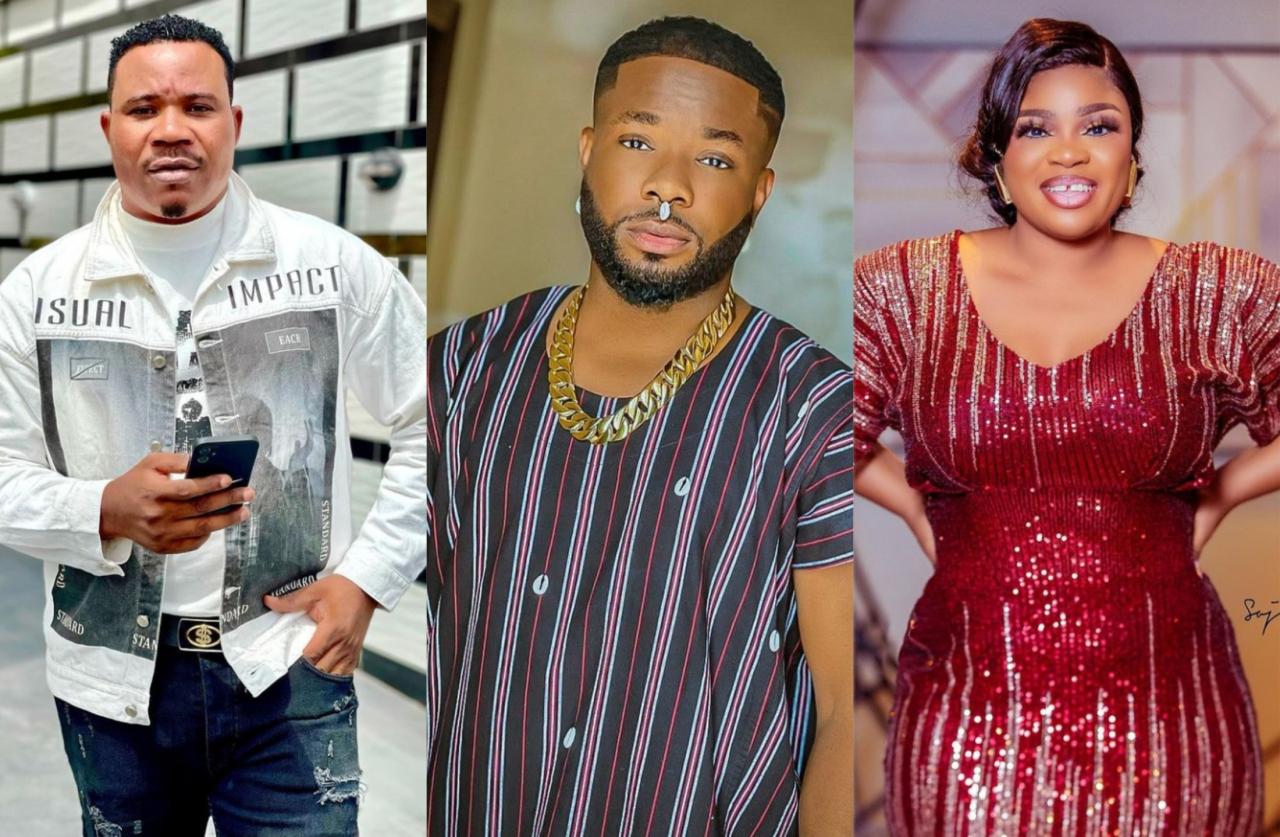 News reported on Sunday, July 3rd, that Ibrahim Yekini had won the hearts of after he linked up with his abandoned children in Lagos state.

The actor had broken down days back when he finally admitted his fault for abandoning his four children with his wife from his previous marriage.

The actor had penned an apology note to make amends for his denial about his children’s welfare and promised to take full responsibility for them.

Itele’s move was made after a controversial Instagram blogger accused him of been irresponsible towards his children despite living an influential life.

Following the call out, Itele reunited with his kids as he took them on shopping spree.

Itele shared photos and videos of the beautiful moment. The makeover that occurred within those few minutes was no doubt undeniable.

Taking to his comment section, Murphy Afolabi expressed how happy he was for him.

“Am happy for you my brother”.

Little did he know that his comment would open his secret.

Gistlover went under his comment section to drag him for abandoning his children.

She revealed that Murphy’s wife is the one who takes care of those kids.

She further claimed that he is having an affair with his colleague, Eniola Ajao.

“Kobo him no drop, na the wife dey hustle take care of those kids, na Eniola Ajao him dey knack up and down, Yeye Eniola Ajeku Odunlade”.

“Forgive me for doing this, na me say no vawulence today but I see Murphy oloyinbo isonu for comment section dey do like better person, Murphy matter don dey ground sef before itele own, I come see Werey dey comment like who God like, Werey drop him kids for Ikorodu he no go drop money and won’t go home for months,Na Eniola Ajao him dey dick up and down. Eniola Ajekun Odunlade me wey I wan go cheer itele up before as I see him comment I don throw am bottle for comment section you can go there to catch up with the comments, him wan come dey do like better person, werey oni intonation, I come in peace ooo”.

A lady took to the comment section to corroborate Gistlover’s claims.

She claimed that Murphy doesn’t drop feeding allowance or upkeep!

“How many of this children did you know? Go back and check his page he posted a particular baby on d first of November last year! She’s also his child! Dis bastard doesn’t drop feeding allowance or upkeep! That baby stays in a very very uncomfortable place with her grandma’s”. 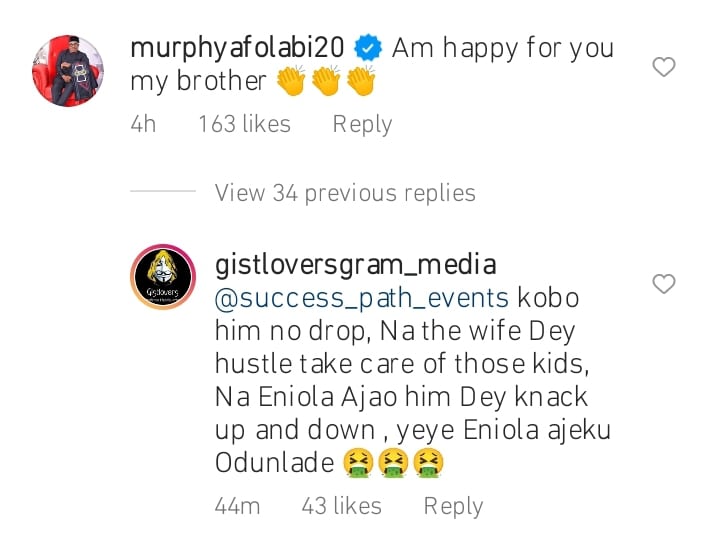 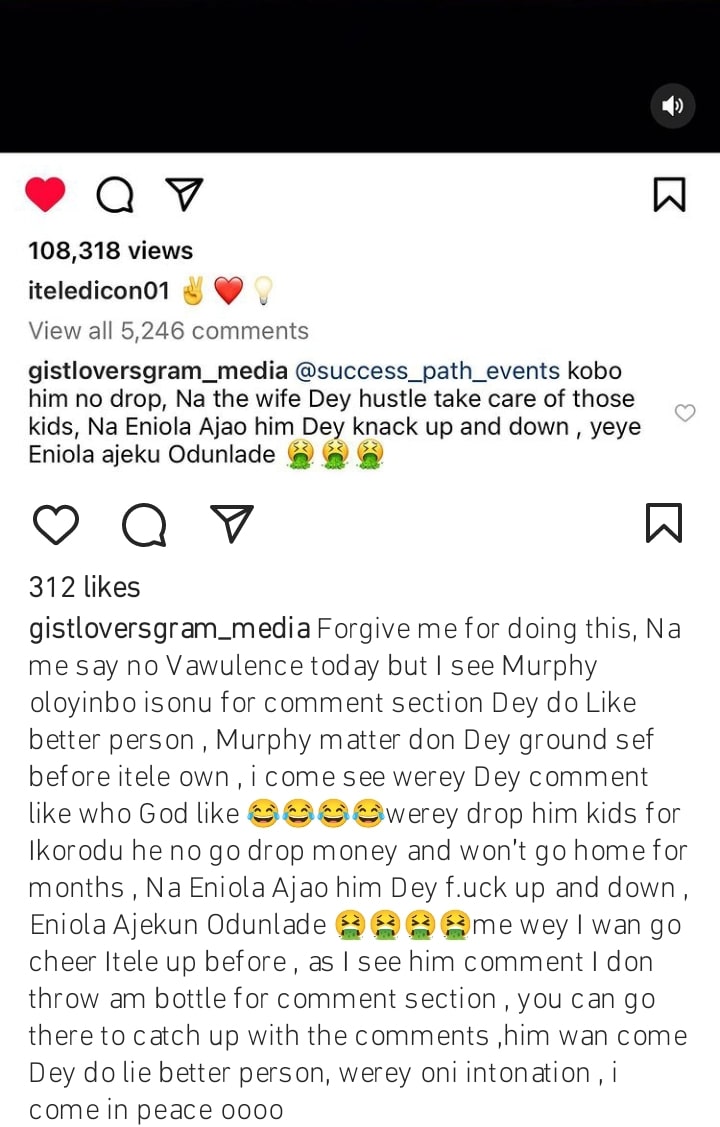 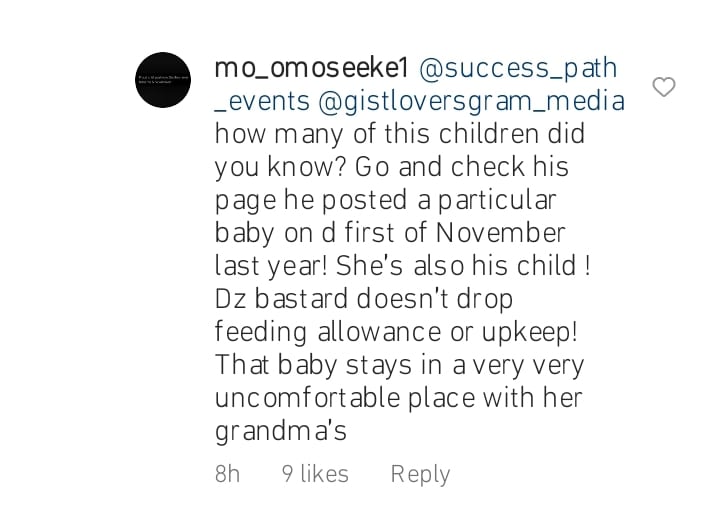 SEE ALSO   You must admit your mistake, and learn how to turn that it into an advantage – Itele advise