Popular singer, Naira Marley has been subjected to mockery following the release of his album, Gods Time is The Best (GTTB).

News reported on May 30th, which was the released date of the album that Naira Marley had walked the line between Afrobeats and hip-hop while dropping a plethora of hit tracks.

To commemorate Marlians’ Day, Naira Marley released his highly awaited first album titled “God’s Timing’s The Best” (GTTB) on May 30, 2022. This new endeavour is a sequel to his original mini-project, ‘Lord Of Lamba’ (LOL)

Social media users have now taken to the comment section to mock him for his songs and to drag him for not creating a buzz as his counterparts do.

A netizen caused a stir online when he rated the singer’s new album. He stated that Nigerians need to apologize to white money as Naira Marley’s songs were the worst.

“Just listened to some tracks naira marley’s new album and I think we should apologize to White Money”.

holla_beesee : That means whitemoney music na celeb for where nairamarley own dey

terrific_wealthy : Some people no get manners

Cathy_reigns : Whitemoney dey on him own stray bullet come meet am

uc__papi : Honestly some of this big names are overrated

Another critic tweeted, ” Naira Marley dropped the first album of his career, no PR, no hype, nothing. He still dropped it on a Monday morning. He thinks he’s Wizkid or something”. 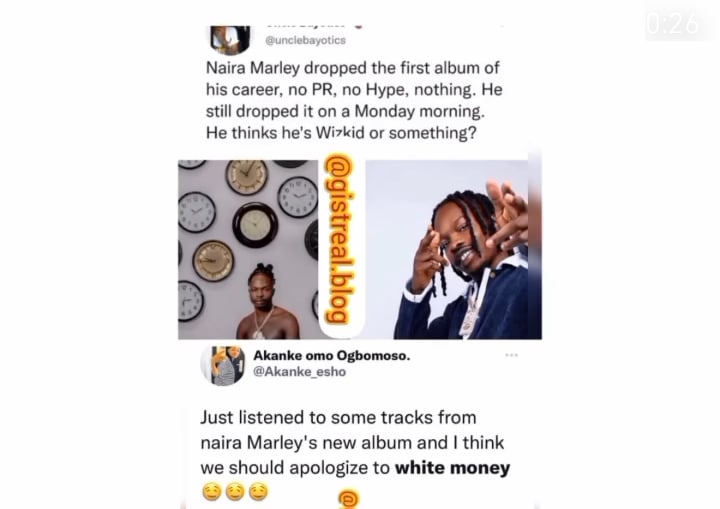