Tanzanian pastor, Allen Mziray, makes a controversial claim about the late Nigerian singer, Osinachi Nwachukwu, on how she did not make heaven.

This comes weeks after the singer lost her life to domestic violence at the hands of her husband.

The preacher who claimed that God spoke to him revealed that the singer did not make heaven as a result of her worldly adornment.

OSINACHI NWACHUKWU AND HOW SHE FAILED TO ENTER THE GATES OF HEAVEN.

Let me give a warning first, ever since I shared a revelation about Victoria orenze people have been attacking negatively and claim that I’m sharing false revelations that misleads people.

I wanna say this, no one is forced to believe what i write here so if you feel like I’m sharing lies don’t waste your time to write me an essay trying to prove me wrong.

Comments will be deleted and accounts blocked. I don’t waste time in arguments.

I wasn’t thinking about this topic at all, I didn’t even imagine the Lord will tell me to talk about it but I have to obey him.

I’m sorry for the heading if it’s hurtful but it’s the truth, I’m not the heaven gate keeper but what I hear from the Lord I’m told to say.

I was in the bathroom when i heard the voice of the Lord speaking to me. He said ” Go and talk about osinachi nwachuchukwu and how she failed to enter the gates of heaven because of worldly adornment”.

He spoke few words and he went quiet. I was wondering why the Lord told me to talk about osinachi after so many days that have passed. But let me say what the lord desires so that his people can reflect from this and abandon worldly adornment.

I don’t have to talk about her background because she’s even more famous in Africa and possibly in the world now.

her news of domestic violence has been on the headline even here in my country, it’s so tragic how she died in the hands of her cruel and heartless husband.

It was after her death that all the stories about domestic violence she has been experiencing from her husband broke out. I was so sad to hear all that but i because even sadder to hear from the Lord that she failed to enter the gates of heaven.

The Lord told me” it is true that i anointed her and i gave her the gift of worship, she was my servant but she failed to separate from worldly adornment, as a result she was not allowed to enter the kingdom of heaven because of wordly adornment”.

This is a very sad thing saints, the Lord is very serious when it comes to his word, he does not change nor will he change.

If he says that no jewellery for his children then we must obey his word regardless of where you congregate.” 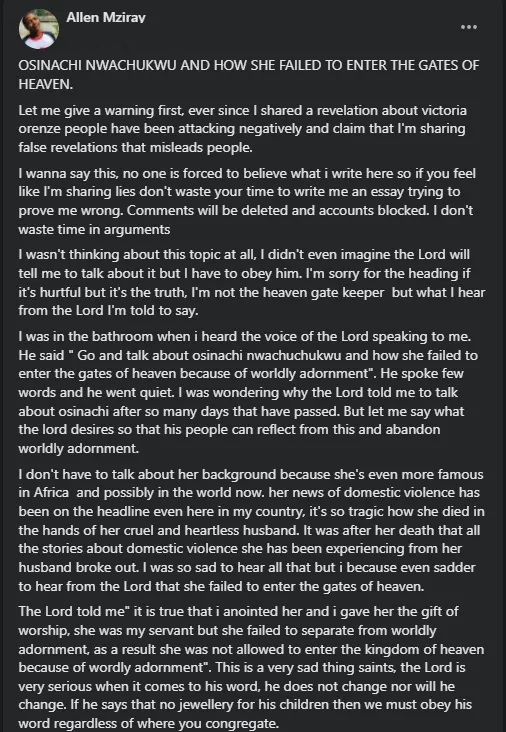 Osinachi sings ‘Ekwueme’ in the mortuary at nights – Attendants cry out