After Muslim faithful and actor Ibrahim Chatta condemned the gruesome murder of Deborah Samuel, who was burnt alive in Sokoto, his followers took to his comment section to react.

News gathered that Deborah Samuel, a student of Shehu Shagari College of Education, Sokoto was called out from her hostel and was descended on with sticks and stones until she could no longer breathe, thereafter set her on fire.

The statement by the police reads: “At about 0900hrs, a distress call was received from Shehu Shagari College of Education, Sokoto, stating that students were rioting over one female student named Deborah Samuel, a level two student, who was accused of making a social media post that blasphemed the holy prophet Muhammad (SAW).

“Students forcefully removed the victim from the security room where she was hidden by the school authorities, killed her and burnt the building.

Reacting, actor Ibrahim Chatta condemned the gruesome murder of female student, saying; “This is not true Islam, killing and burning for hate speech is nothing close to Islamic laws. You all should be careful out there. Don’t be inhumane by defending the religion you know less about.”

Following his reaction, his followers took to his comment section to react.

Some said that Deborah Samuel might not get justice as it is a usual practice. Others sided with the actor, emphasizing that Islam is a religion of peace and not of war. One commenter blamed the perpetrators but wondered why Muslims are not condemning the murder to show that they are not in support of such act. 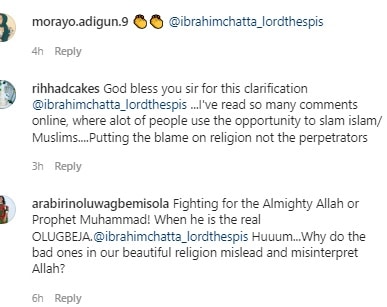 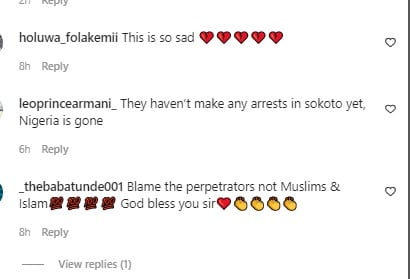 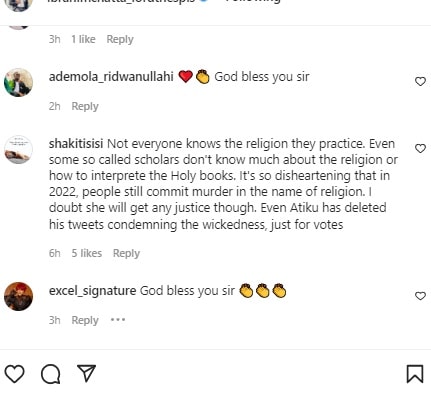 “She paid the ultimate price for her Family Breakthrough” Mixed reactions as Deborah Samuel’s Parents become Estate, Car owners with other benefits (VIDEO)