Nollywood actress, Laide Bakare has been dragged by a popular journalist, Unlimited Eniola.

Taking to his Twitter page, the journalist called out the actress for ‘foolishly’ exposing her children.

This is coming after Laide Bakare claimed that her 13 year old daughter, Simi gifted her brother a car worth millions.

Laide Bakare had announced on Wednesday, June 1st that her 13-year-old daughter, Simi gifted her brother, a Benz for his 9th birthday.

Sharing photos of the new whip, the single mum of three and controversial actress, Laide Bakare wrote on Instagram “From A 13 year old simi To her 9yr Brother DAMY, I’m Blessed indeed, Aliamdulilai for everything, LOVE lives in my house, i dont hunt for it anymore. Allah Be praised Always, youngest billionaire, no fake zone, multi landlady, everything organic”

In another post, she wrote “Money Truly stops Nonsense, my forthcoming Book launch is gonna surely impact your life positively{ how to make billions in 6 months) can’t to share with u simi is just 13, she just gifted her brother A Benz”.

Reacting to it, Eniola stated that the actress is supposed to be among the gathering of foolish fools.

According to him, the actress should get an invitation to gatherings for people who talk nonsense and act foolishly.

He added that Laide needlessly exposed her children and she did it foolishly.

“When you talk about nonsense and call for the gathering of foolish fools, kindly invite Laide Bakare to the table. She needlessly exposed her children and she does it foolishly”.

SEE ALSO   Isbae U opens up on cheating scandal, domestic violence and his crashed relationship with Mummy Wa 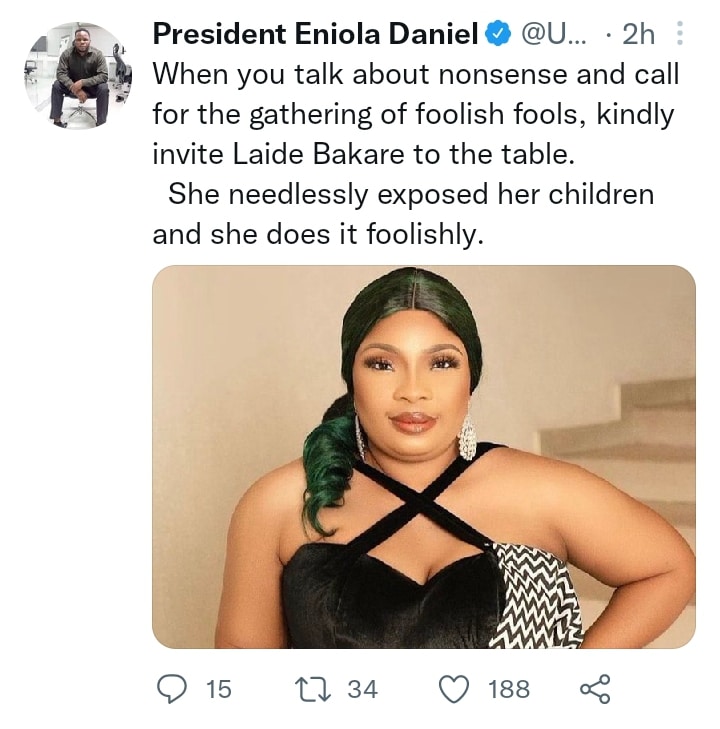