Bisola Aiyeola, a former Big Brother Naija housemate, has spoken up about the difficulties of being a single mother and how her wedding fell through following the marriage proposal. 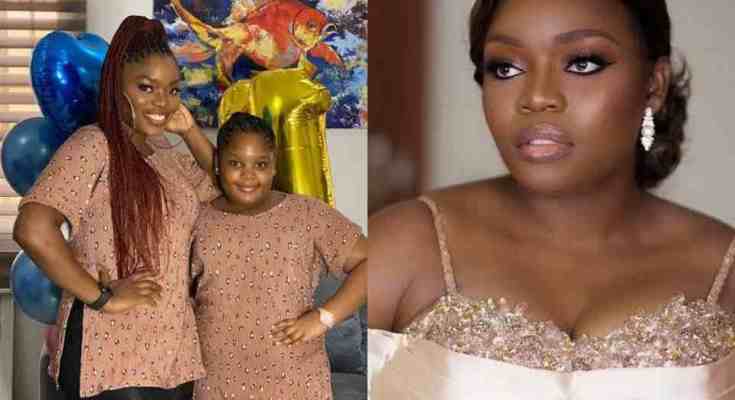 Bisola Aiyeola stated she wants to start having children right away but is secretly dreading the idea because of her difficult pregnancy at age 23 in an interview with Taymesan for his Tea With Tay podcast.

Bisola Aiyeola claimed that her baby’s father proposed to her as a result of his excitement over the news of her pregnancy. Nevertheless, they never got married because of a few problems in their relationship.

Bisola Aiyeola claimed that using her mother’s old scarves, gele, iro, and buba as diapers while nursing her child was a major issue.

I had Leyla when I was 23. It wasn’t the best of times. You know they tell you when a young girl get belle, e dey easy, na lie! It’s a bloody lie. Now I want to have a kid but I’m lowkey dreading it because her pregnancy was a tough one. I used to throw up a minimum of 4 times every single day until about 6/7 months.

It was so bad that if I had any food – spittle, then bile, then blood would come out. I was the skinniest I have ever been in my life until the last trimester when I started retaining fluid. Her labor was tough, it was three days. I fell into labor Wednesday and had her on Friday at night.

At the time I got pregnant and I found out and I told Leyla’s dad, his response was such a huge relief. So the day I told him, he was like “Ah great, we’re having a baby.” I didn’t expect that from him. He used to be such a sweet boyfriend, very sweet. I don’t know what went wrong, what happened before the shift came. But he used to be so sweet. And with that response from him, I felt like yeah we were going to take on the world. Then he proposed. We never got married.
He proposed but the wedding never happened and then we started having our issues upon issues. After a while I think he got really insecure and it’s not like I was even ballin’ at the time. Life wasn’t good for me. He wasn’t very present and that was one of the things we used to fight about. We called off the engagement when my daughter was 2.
There was a time I was feeding my daughter garri. I was feeding my baby garri. Like we will allow the garri soak. We didn’t have diapers, we would have to use my momsy’s old scarves, her gele, buba and iro, use am do napkin. Then cut polythene bag into X shape and tie so she can use and sleep. This was 2009/2010. She was still a baby not even talking yet. We will wait for the garri to swell, then get like N10 jagu, shake it, mix it inside. Feed her. You will not know that this child it’s garri we’re feeding her. I’m telling you. God really hid my shame with my daughter.

SEE ALSO   #BBNAIJA:‘I caught Emmanuel in the room with another girl, I walked out and he didn’t follow me’ – Liquorose breaks silence

Bisola Aiyeola talk about challenges of being a single mother

I’m tired of being independent, I want to get married before 38 — Actress, Bisola Aiyeola says