Nollywood actress, Tonto Dikeh who is known to never back down from a fight has clapped back at investigative journalist, Kemi Olunloyo.

News reported that Tonto Dikeh had instigated fight with the journalist after she had an Instagram live session with her ex boyfriend, Prince Kpokpogri and trashed the actress for clout chasing with his predicament.

In the video, Kemi Olunloyo claimed that Tonto Dikeh was only bragging and was not behind the demolished building. She went on to call the actress a clout chaser for trying to feed the public with a ‘power image’.

In response to the video, Tonto Dikeh took to her social media story to shade Kemi Olunloyo with threats of sending her to jail.

Kemi Olunloyo via a lengthy post on her Instagram page, Kemi Olunloyo claimed that Tonto Dikeh purchased a gun in Ghana attempting to kill her ex husband, Olakunle Churchill.

Kemi Olunloyo noted how she defended and protected Tonto Dikeh during many of her altercations and drama on Instagram, yet the actress was wishing her bad luck.

“I have the right to ask why Tonto was bragging about her ex boyfriend’s mansion demolition. I supported Tonto Dikeh when she was going through extreme domestic violence and purchased a gun in Ghana attempting to kill Churchill her ex husband. As she was laying curses on another journalist Azuka Ogujuiba, I counseled Azuka on how to handle a dirty bitter divorce of public figures. This is what I’m teaching my journalism interns @2222mediaschool now. After leaving Port Harcourt prison, singer Dencia fed me, bought me new clothes and bought me a ticket to travel home to Ibadan. My daddy late Alabo Graham Douglas housed me for 30 days in his hotel and took me to meet Pastor Ibiyeomie who I’ve never asked a single Naira from till today. Dencia started the fundraiser, Yele Sowore the 3rd donor sent me money from New York and promoted the fundraiser heavily on Sahara Reporters. Tonto was the second donor with 200k, I can’t believe. It’s the same person that is professing Ogun to help me send me back to prison. Did she rush to donate that money for clout in one of the most controversial clout fundraisers known to man. Hushpuppi wanted me to beg Linda Ikeji first, Emenike contacted me lashing out at all these “small children insulting my wellness” and paid off disgracing all the donation clout chasers”.

SEE ALSO   “This Is So Hurtful To Me” – Kemi Olunloyo Speaks After Being Blasted By Tonto Dikeh, Narrates Circumstance of Prison Time (VIDEO)

Not backing down, Tonto Dikeh offered to help cure the journalist from her mental challenge.

She dared her to mention the people who fed her with such information about her.

Tonto Dikeh promised not to back down as she stated that she would help curb Kemi’s veil mouth.

“Madam Kemi please mention the name of this person let’s confirm!! They already told me that you are mental challenged but I may just be your cure!!? Na Ogun true true go help.ke put you back in prison. Agbaya mummy. If you don’t mention the name of that person then you have bought the biggest bad market ever. I will help curb this your veil mouth. M#t kill you there….”. 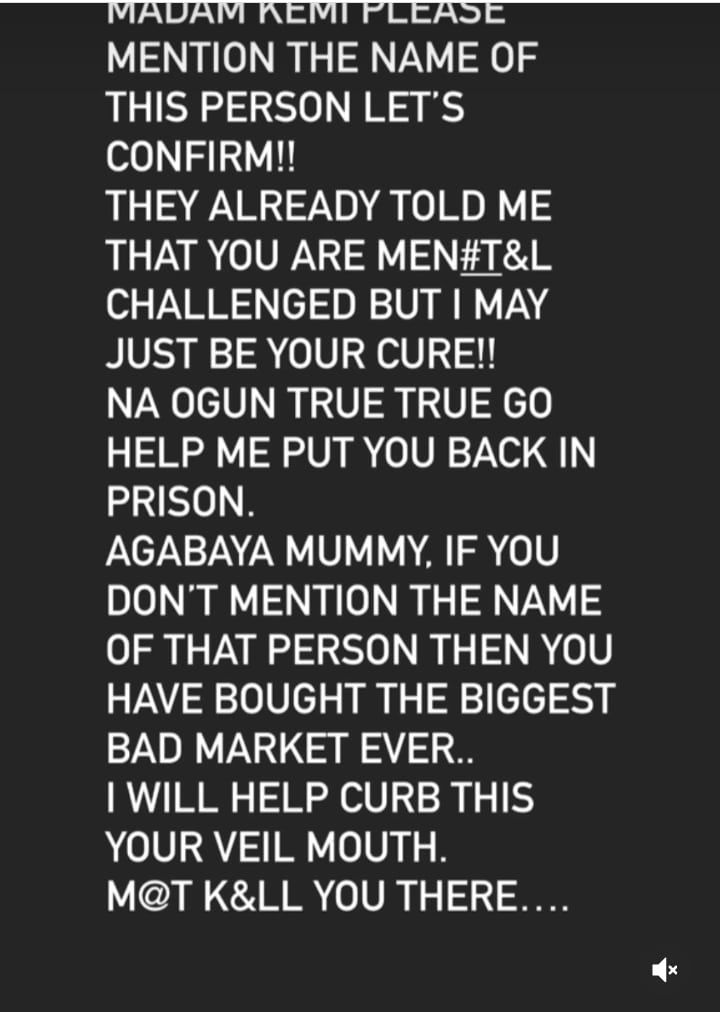 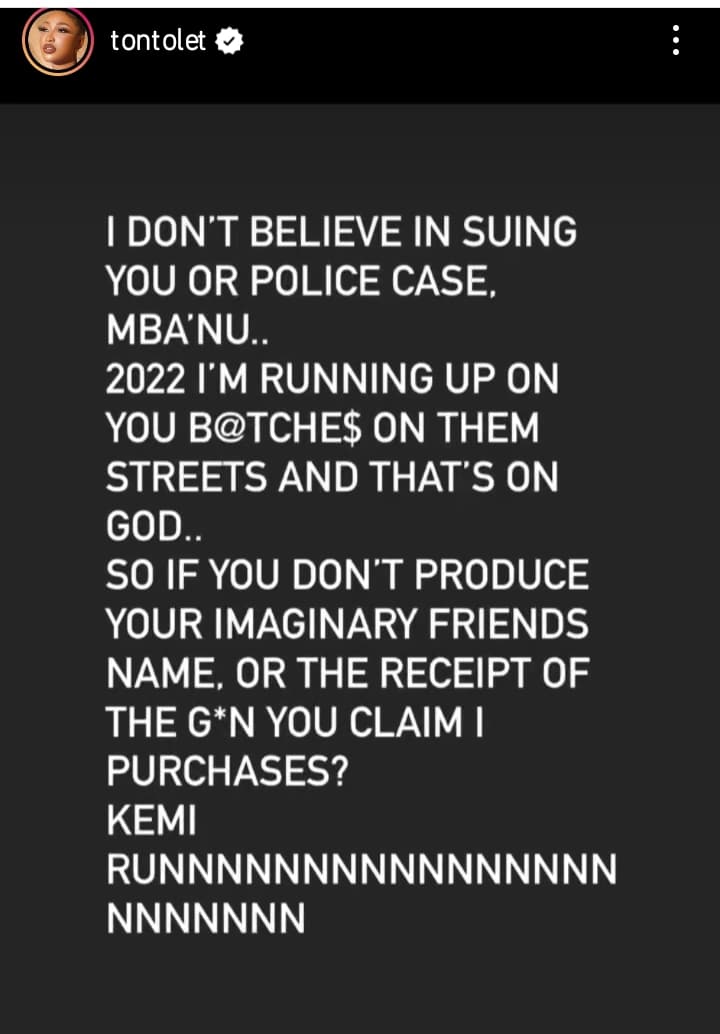 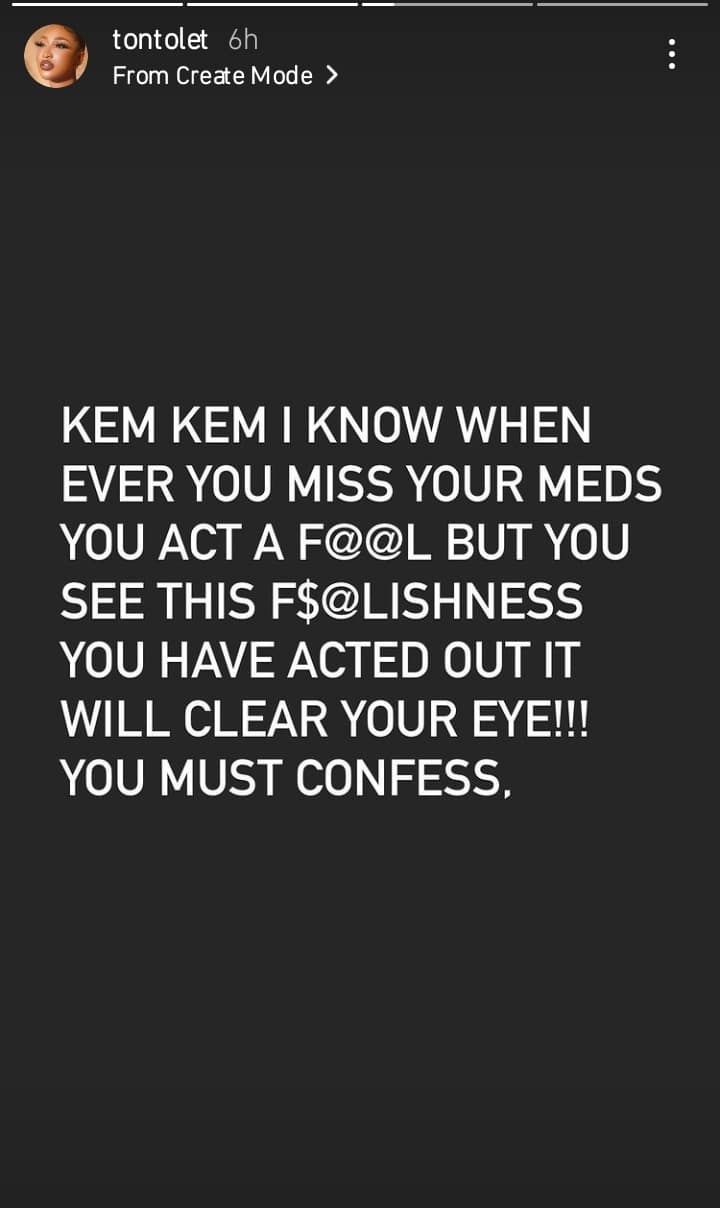 PHOTOS: Actress Tonto Dikeh shows off her massive cakes as she clocks 37