Popular Nigerian actress and philanthropist Tonto Dikeh has taken to her page to drag controversial journalist Kemi Olunloyo for using her name to chase clout.

Tonto Dikeh has been trending for days after she resorted to her social media page to mock her ex-lover Prince Kpokpogri after his house was demolished by the Federal government in Abuja.

Tonto Dikeh took to her page to mock Kpokpogri and associated what is happening to him with messing with the wrong woman. Tonto Dikeh disclosed how Kpokpogri sent his younger to mock her when she lost her mother. She emphasized that she was happy about the demolishing of Kpokpogri’s house.

A lot of people dragged Tonto Dikeh for mocking her ex-lover over his misfortune. However, Tonto slammed those criticizing her.

In an Instagram live session with Kpokpogri hosted by Kemi Olunloyo, she questioned Kpokpogri if Tonto Dikeh had a hand in what happened to him as a way of taking revenge on him. Kpokpogri disclosed that she wasn’t responsible for the demolishing of the house.

It seems Tonto Dikeh was not pleased with Kemi involving her in the demolition of the house of her ex-lover. She has taken to her page to lambast Kemi saying that she will get help from ‘Ogun’ to lock her again behind bars. 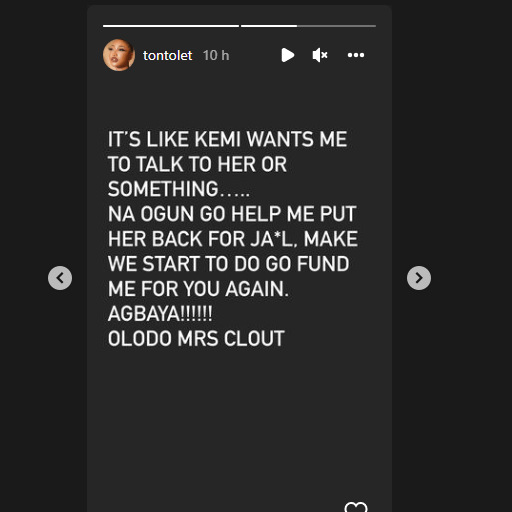