The new trend of bestiality whereby d0gs are captured on camera sleeping with ladies have gotten the attention of BBN season2 housemate Uriel Oputa.

Uriel Oputa who out rightly condemned it, expressed worry about the generation and the method they choose to make earns meet.

Counselling brothers, parents and sisters, the professional chef and actress urged them to do better as they are worth more than this act of bestiality.

I am disgusted honestly sleeping with dogs for money I am worried about this generation, I am worried that young women with able minds and bodies would choose this method to generate income honestly do you know the spiritual implications this act facilitate I’m just praying it is all lies you let Nkita come inside you.

You need to do better parents Brothers sisters you are worth more, as a former health care professional let’s not talk about the infection waiting for You. 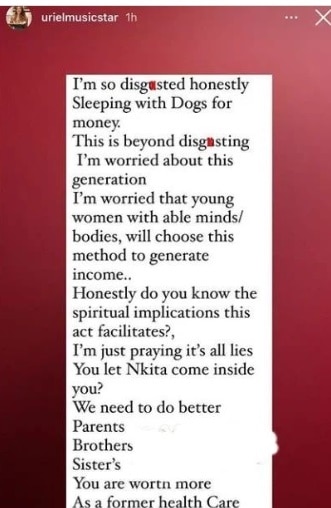 Erica, in a post via her Twitter handle, declared that she’s giving all her love to her dogs as most humans don’t appreciate good people.

The reality TV star wrote “I’m giving all my love to my dogs, most humans don’t appreciate good people.”

While many of her fans were trying to read meaning to her tweet, Erica, in another tweet via her official handle, wrote, ” Please don’t add salt and pepper to my tweet.”

SEE ALSO   VIDEO: “You Go Marry Me Abi You No Go Marry?” – Man Proposes To Girlfriend In A Strange Way, She Reacts (WATCH)

The reason behind her initial tweet, however, remains unknown.

Erica is one of the most popular housemates from the 2020 edition of the BBNaija reality show; although she was evicted from the house, she has grown to become a force to reckon with in the entertainment industry.

Uriel Oputa cries out over recent trend of bestiality

VIDEO: Lady who $lept with D0g for N1.7million in Lagos opens up

Nigerian Police begins haunt for lady who said she was paid N1.7m to sleep with a d0g