Actor Yomi Fabiyi’s new wife is working really hard at changing the narration of their marital crisis after she previously goofed and called him out on social media.

News recalls that on the 11th of May, 2022, Yomi Fabiyi’s new wife, Grace Jimoh Fabiyi dragged him on social media. The mother of one took to her Instagram story to call him out and issue a stern warning to him; a move that further fueled their marital crisis rumours.

Grace warned him not to push her to the wall. She wrote, “Yomi don’t push me o @realyomifabiyi”.

In another post, she wrote, “If you don’t want God to punish you @realyomifabiyi”. However, the post has since been deleted.

Since the News became full-blown, the couple began posting PDAs and showing off romantic videos of themselves on Instagram.

Worthy of mention is their latest visit to Sharon Parish, a celestial church in Ikorodu Lagos.

A fan who saw them at the church confirmed their visit in one of Grace’s comment section and she acknowledged the fan’s post. 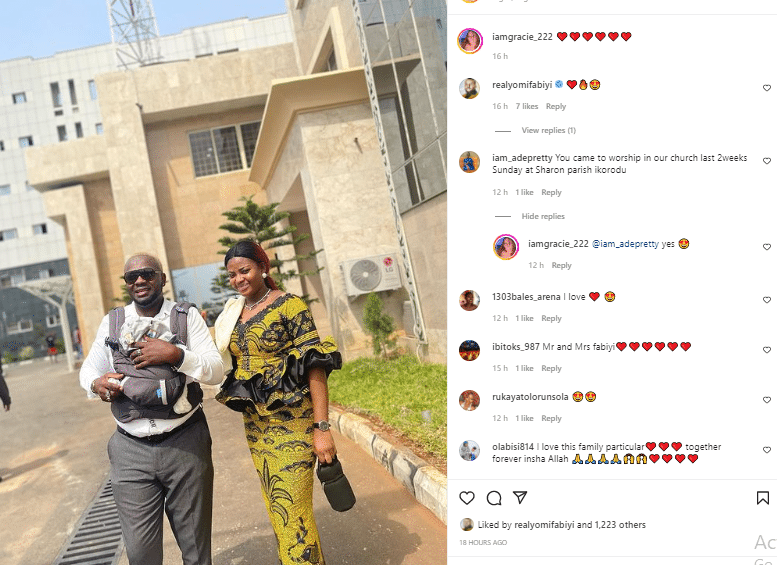 Yomi Fabiyi had previously responded to the viral reports of his crashed marriage, by unfollowing his colleagues and posting a photo of himself and his three-month-old son with this lengthy caption below:

“Whenever I feel the urge to talk, to tell my side of the story, to show how peaceful, nice, kind, non-violent, non-troublesome, law-abiding, instead of coming to talk on social media which has been bastardized by E-witchcrafts, I rather seat DELIGHT, AKOREDE FABIYI down and pour out to him.

He is now my bestie, my paddy, and my gist partner. He gat my blood running in his veins. He came at the right time to bring light(Imole) into my life and family, which will invariably usher in long-lasting blessing(AKOREDE), bearing in mind that my story is almost synonymous with that of Joseph(Yusuf).

SOCIAL MEDIA and a handful of QUACKS are taking over the 4th Estate(Real Journalism). They are abandoning the right thing and glorifying criminals who hide their identity to TORMENT and VIOLATE RIGHTS. You even find real media houses seeking a rejoinder quoting such a source, what a shame. I won’t respond to such, I have come a long way to allow social media terrorists and criminals to dictate my life and MO.

These syndicates (most within the movie industry, formerly in the industry, lesbian ring and a few in diaspora) created a social media portal to hoodwink many ignorant young people and careless adults into this criminality they fake as blogging and journalism. They are not complete until they read junk and violations of other people’s rights. What a demonic spirit.

BUT WE DEY LOOK. I don’t make trouble, I only make GOOD TROUBLES. Nobody is invisible if you are online no matter how you switch IPs and Phones. One Day will be one day. CHANGE BEFORE IT IS TOO LATE.”

“This is not necessary” Mercy Aigbe, others react as Yomi Fabiyi speaks on Mercy Aigbe’s character