The actor, who is unashamed of his actions, has listed the several achievements his second marriage has brought to his family.

Yul Edochie noted how his first wife, May Yul Edochie had bagged her first endorsement which was something that never happened before the scandal.

He admitted that he had offended his wife in several ways but he has apologised to her in a sincere manner.

Further counting his blessings, he stated that the scandal has made him more famous and has brought Judy to the spotlight.

“God works in mysterious ways. Marrying a 2nd wife has brought me blessings and also elevated my two lovely wives. Sometimes it takes the things we see as disappointments to happen for elevation to come. It happened many times in the bible, just like the case of Joseph”.

“I’m a man after God’s heart. I’m like King David in the bible. I communicate with my God and He guides me every day”.

“I wronged my wife May from the way I went about it and I have apologized to her sincerely from the bottom of my heart, but in the eyes of His things are different. God blesses differently. His ways are not our ways. Our destinies are different. Don’t be deceived by the white man’s culture”.

“And if that happens to be your destiny God will elevate you and elevate all that concerns you through it. My wife May just signed her first endorsement deal. Something that never happened all these years. And this came from what many saw as a disappointment. I have realized that God’s ways are different”.

“Many more deals will still come to her cos she’s a wonderful person. So is my wife Judy. She has also been elevated. Now widely known, her career is bigger with a whole lot going for her as well. Let me not even talk about myself. My stardom has tripled. My name is being mentioned in places it never got to before. My children are blessed. Summary: The ways of God are different. Our destinies are not the same. You may not understand another man’s destiny and that’s because you’re not supposed to except your own. If God gives you more than one wife it will come with blessings and elevation. Run your race and put God first in all you do. He speaks to each of us differently. Love and peace to us all”.

News recalls Yul Edochie had finally revealed why he went ahead to marry actress Judy Austin.

The actor revealed that he married Judy because she had made several impacts in his life and he couldn’t leave her. 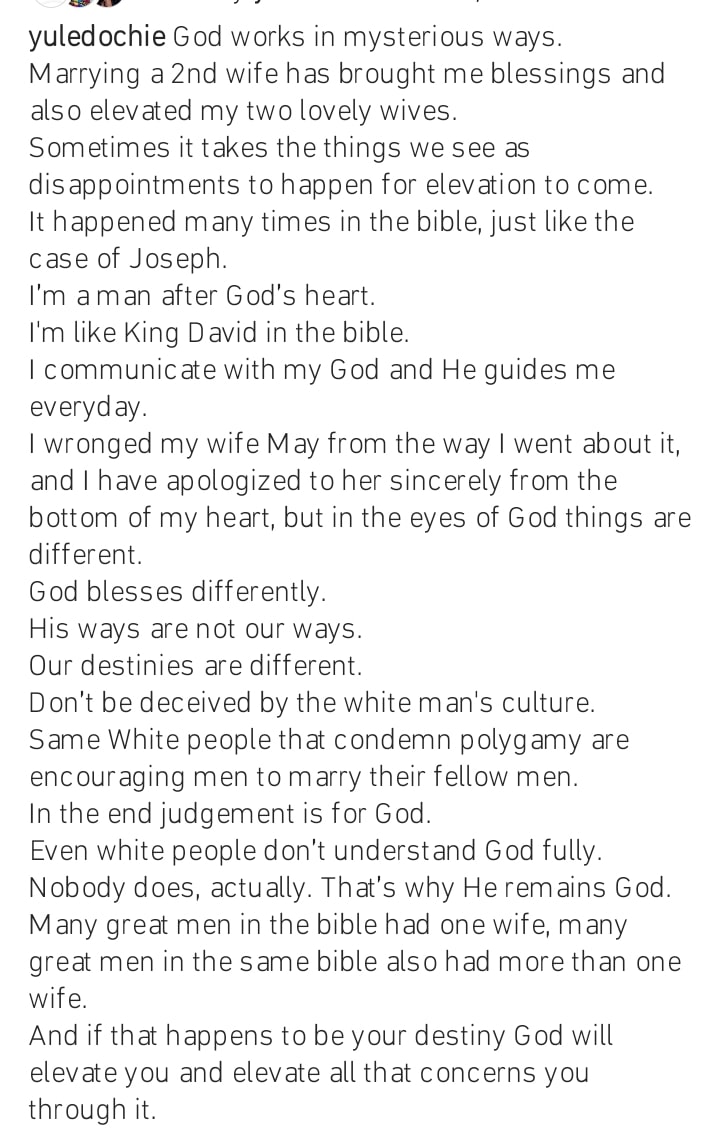 Yul Edochie spills on how second marriage has brought him blessings

Leaked Chat Of Yul Edochie’s Wife Opening Up About What She Found Out About Her Husband, Yul Edochie

‘You can’t choose who to fall in love with, na love go choose for you’ – Yul Edochie