The Nigerian Defence Academy (NDA), Kaduna, wishes to inform the general public that the list of Successful candidates for the Armed Forces Selection Board (AFSB) 73rd Regular Course is OUT! 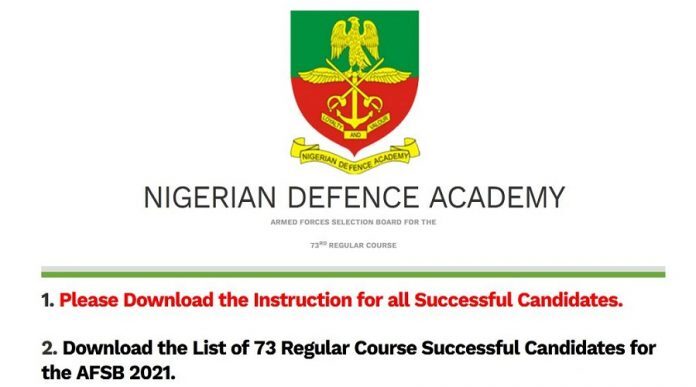 Armed Forces Selection Board (AFSB) for the 73rd Regular Course 2021

The Nigerian Defence Academy Screening Test was held on Saturday 31 July 2021. The list of successful candidates whose names appeared below and could also be accessed at NDA official website www.nda.edu.ng  are to report for interview before the Armed Forces Selection Board (AFSB) from Saturday 14 August – 25 September 2021 at the Nigerian Defence Academy Ribadu Campus, Kaduna. Candidates will appear before the AFSB in 3 Batches as follows:

Candidates from the underlisted states are to report to NDA on Saturday 14 -28 August 2021:

Candidates from the underlisted states are to report to NDA on Saturday 28 August 11-September 2021:

Candidates from the underlisted States are to report to NDA on Saturday 11-25 September 2021.

Instruction for all NDA Successful Candidates

Candidates MUST bring along their original and 2 photocopies each of the following documents:

How to check the NDA list of Successful Candidates

Tuchel fire back at Conte’s comments of Lukaku failings

© The Bulletin Media 2021 | All Rights Reserved