Nollywood actress and producer, Rita Dominic has stepped out for the first time with her husband, Fidelis Anosike since news of his alleged affair with her colleagues broke out.

News recalls that faceless gossip blog, Gistlover had claimed that Rita’s husband, Fidelis Anosike was having an affair with two of her best friends with names starting with U and I, who attended her traditional wedding.

Reacting to the speculation, many who believed that the letter U stands for Uche Jombo stormed the comment section of her Instagram posts and asked her to clarify the rumour.

Responding to the accusation, Uche urged the blogger to reveal the real names of those involved so she can be left alone. 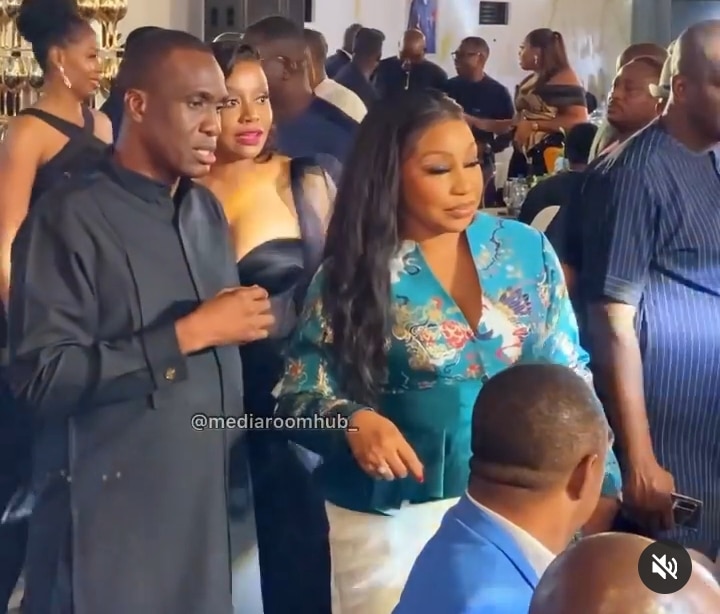 Putting up a tough front, Rita Dominic and Fidelis seemed unbothered with the rumours flying around about their marriage.

The couple were all smiles as they attended the 60th birthday party of Nigerian technocrat, businessman and politician, Timi Alaibe.

Rita was glowing and shining and was in all smiles as they greeted several distinguished personalities at the event.

In a video which was captured online, the couple were seen greeting BBNaija’s Kiddwaya’s dad, Terry Waya.

News recalls after weeks of been mum on his alleged affair with two of Rita Dominic’s best friends with names starting with U and I, businessman Fidelis Anoisike had now responded by sharing a photo of himself and his wife, laughing out loud.

The drunk in love newly couple stared into each other’s eyes with joy; an easy interpretation of laughing at the rumours and not been moved.

Rita Dominic and husband, Fidelis Anosike step out for the first time amidst cheating allegations